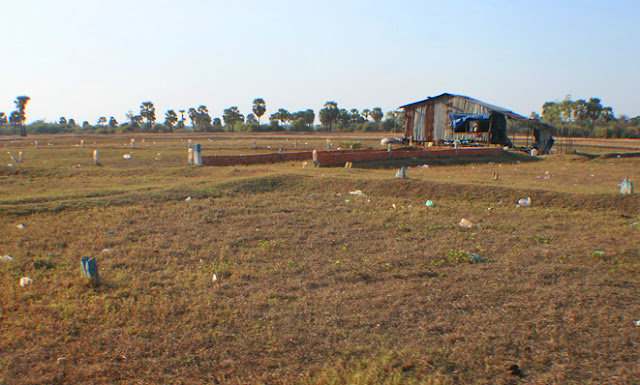 Stones set in rice fields mark land divisions on the outskirts of Phnom Penh. Make-shift houses sit on some plots, while empty plots await the arrival of displaced families. The families come from varying districts in Phnom Penh, they are gathered in trucks and then left in the rice fields to rebuild their surroundings. No means of income, basic services or amenities exist; the allotting stones cover reminisces of irrigation channels causing flooding. Families find themselves 25 km outside Phnom Penh with only some building materials from their past home and no signs of livelihood. The impression is that of a type of modern day concentration camp under the guise of government policies advocating poverty reduction.  Moreover, redevelopment projects in Phnom Penh are not progressing as fast as the occurring evictions, leaving land in central Phnom Penh empty for years, claimed by fences and company signs.
According to Sahmakum Teang Tnaut, a Cambodian organization focused on research, housing rights and community infrastructure; the past ten years in Phnom Penh has seen a major shift of urban poor settlements from the inner city core to far-reaching peripheral areas. In Phnom Penh there are currently 410 communities affected by urban resettlement. This work is about families who were evicted from Sambok Chap in central Phnom Penh in 2006.  In Sambok Chap, 1200 families actually held land rights, but were cleared out by the police to various sites including the more publicized Andong Village. The following descriptions are from Trapaing Krasang Village of Dangkor Khan. 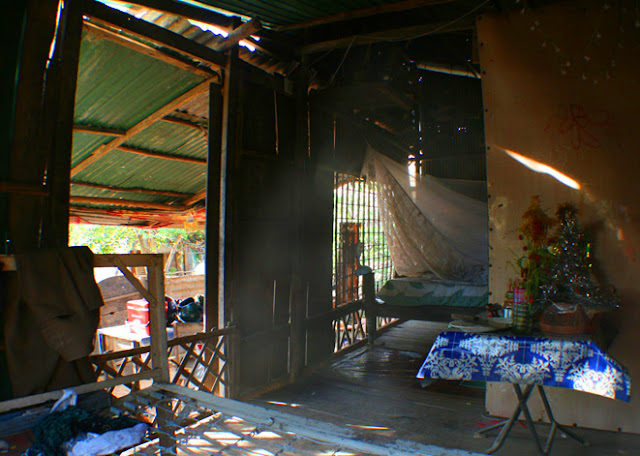 Resident One:
I used to live in Sambok Chap in central Phnom Penh. I have four children and no husband. I depend on my son. I have two sons, one is being taken care of at an NGO, and the other is working in Phnom Penh as a construction worker. Here there are no jobs, so you must go to Phnom Penh—but it’s very far, about 25 km from here. It is also difficult to work, sometimes I don’t get the money from my son because the police stop him. If someone from here has work they must pay some to the police.
If people stay here there is no way to make an income.  In this village we have a market, there are many sellers but no buyers.  Before we lived here, I could earn maybe 2.5 dollars per day in the city—but now no.
Why did you move here?
Resident One:
The Authority moved us. So if we don’t come, they will destroy our house. We’re not happy to move here but this is the force of the Authority. They moved us with many police and military. In the morning we surrendered. People are not happy with this forced eviction.  We wanted to spend one more night there, but they did not accept this.
On that day, when I moved here, the Authority did not give anything. I made a complaint. Before the Authority gave us three plots for the families of my brother and my sons. But when we arrived we only received two plots. They will take whatever they want.
Later the Authority gave us 15 kg of rice, one box of meat and 20 dollars.
I first moved to Phnom Penh with my three brothers in 1979 [sobbing]. Pol Pot was in power, we were starving. We wanted to get out of Cambodia, we went to the Thai border. Many people were going to the USA, Australia, Canada—we wanted to go but we were stopped by the army, so we made our way to Phnom Penh.
We used the money we had to build the house in Sambok Chap. In 2005-2006 people started being moved out. We were taken to this land, it is a camp with six sections. We all came in trucks from different parts of Phnom Penh. 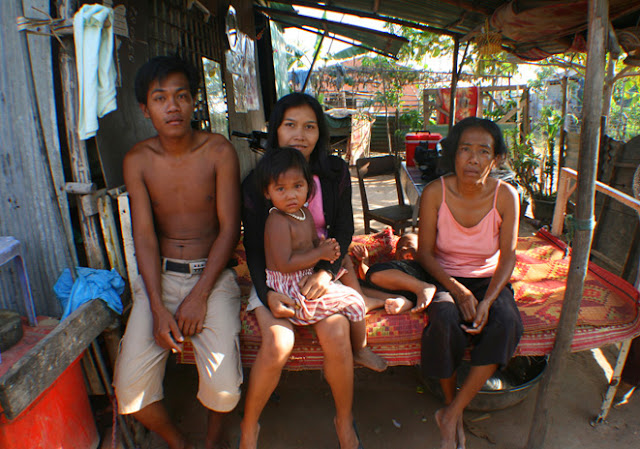 Who lives with you here?
Resident One:
My brother’s wife and children, and my son living in the next room is married with his wife and children.  We all live on these two plots. My husband passed away in the ‘70s. Before my husband was a fortune teller [killed during the Khmer Rouge].
I depend on my son and brother. Also I have support from Temple. I get my rice from Temple. My health is not good, because I don’t eat much and I have a lot of stress. Last Monday I went to the hospital. There are missionaries here that have a clinic and a school for young kids.
Do you prefer to live in Phnom Penh or just have a good living environment here?
Resident One:
When I lived in Phnom Penh, I was also sick but not this much. The doctor explained to me that I am having stress because I am worrying too much. When I moved here—there are no jobs, one of my sons is still in Phnom Penh, so there are many complications and I am not happy. I would rather have stayed.
The house before was smaller than this one, but we could live. The house had windows and a door at least, it didn’t flood.  Now it floods and the construction is poor. We could add on to our old house and change the rooms, but here we can’t.
How did your family members find a job?
Resident One:
My son and brother just started working a year ago. When we first moved here they didn’t have a job.  Now in Cambodia, there are a lot new buildings, so it is easy to work in construction. But it is not much income. It takes one hour by moto from here to Phnom Penh. Sometimes we ride with a truck from an NGO to go to the city. We are informed from the NGO when they are coming here, so we can get water and a ride. By moto, we pay 2.5 dollars to go to Phnom Penh, one way. In a day we pay more to go to Phnom Penh and back than we can earn. With the NGO we don’t pay money, but only sometimes we can be picked up. 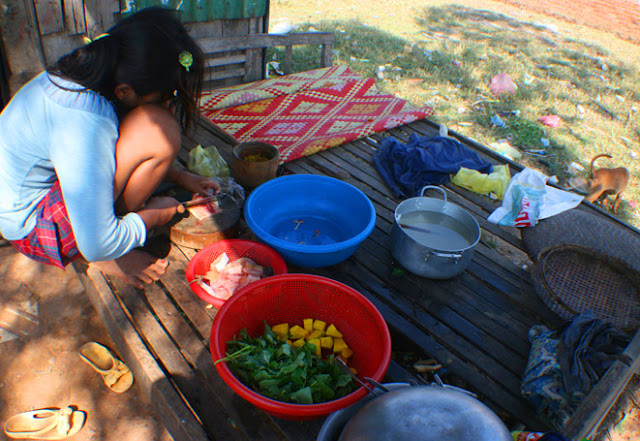 Resident Two:
I was born in the countryside, in Preyveng Province in 1967. I left when I was married, I was 18. It was 1990 when my husband and I went to the Diey Kraham Community in Phnom Penh with our children.
We received a notice from the Authority to move to Sambok Chap in 2005. About 1,000 families from Diey Kraham were moved there. I thought Sambok Chap would be our last home, it was nearby and not that difficult to move.
Sambok Chap was also closer to my relatives and I thought I could get a better job.  I found a job maintaining a garden on Nathan Road and I made cakes to sell.
After a year, I was sent here in 2006 from Sambok Chap. The Authority sent the notification to my husband, but he left me for another woman; she’s a doctor and they live by the airport now. He never came to visit, we have six children. I have two brothers and six sisters, only one of my brothers lives near here, in Section Three.
The Authority transported parts of my old house here. They also gave me ten dollars.
I want to live here because I have more space and the environment is friendlier. But there is no work or other infrastructure. For five years I haven’t worked, I rely on my son working in construction. He comes to visit every one or two months. 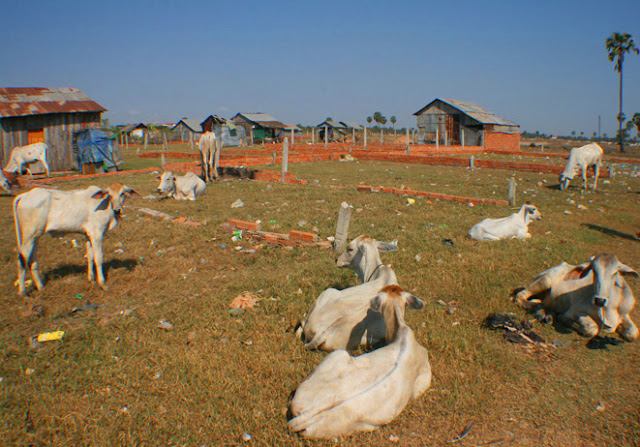 What more do you want?
Resident Two:
I want housing rights, if I can find the money to pay. This house is the old one, the structure was transported. People in the village helped each other to reconstruct the homes from the transported material.
I think Phnom Penh is not like the countryside. In the village I can know everyone, but Phnom Penh is not like that. In Phnom Penh, I didn’t leave my house because there are a lot of bad people around so it made me feel unsafe. In this village, I don’t know everyone, but if someone lies people will know. I couldn’t trust anyone in the city.
What I liked about Phnom Penh was that I could make something and someone would pay a good price for it. Here I can make things but no one will buy them. Things were more expensive in Phnom Penh but at least you could get them. Now I pay for litres of water, there are no basic things.
In Phnom Penh there were schools for my kids, here the missionaries set up the schools. I prefer my kids go to school in Phnom Penh. I want a suitable house, more than this. I want a job and I want my kids to go to school.